In which we explain how camel ankle bones relate to the fate of global ecosystems.

I’m taking time away from comic book blogging to do some actual SCIENCE BLOGGING. Just last month I published a paper in Palaeontologia Electronica with my esteemed colleague Brianna McHorse (who blogs over at Fossilosophy). It’s called “A method for improved identification of postcrania from mammalian fossil assemblages: multivariate discriminant function analysis of camelid astragali.” In this paper, we work with fossilized camel ankle bones from the Thousand Creek of Nevada that are about 8 million years old. Here’s the plain-language abstract for those who don’t speak paleontology. Brianna and I have coauthored this blog post to share the wonders of these ankle bones with a broader audience.

We’re sharing because you, as an astute reader of science blogs, are likely interested in the fate of the world’s ecosystems in this era of anthropogenic climate change and habitat destruction. What does that have to do with camel ankles, you ask? If we want to understand how modern ecosystems are likely to respond to environmental change, we need to have good process-based models, right? If we want to build these models, we need to study similar systems that have been through similar changes before; that’s the essence of historical science. The problem is, of course, that the scale of changes we anticipate in the next 100 years is of a size not seen since the Miocene (which is the time from about 23 million to about 5 million years ago), so we have to look back at the Miocene to build and test our models of ecosystem function.

That’s where our camel ankles come in.

Many Miocene fossil sites are full of camel ankle bones (and ankle bones of other animals, too, but you have to start somewhere!). Ankle bones are small, compact, and extremely durable. They are also in a part of the animal that doesn’t have much tasty, tasty meat. As a result, they often escape significant damage from banging against rocks during transport before burial or by scavenging.

Yes, but why should I care? OK, we’re getting there. Be patient.

Most fossil mammals are identified by looking at details of the skulls and teeth. Unfortunately, skulls have lots of tasty meat on them, so they often get crunched. Also they’re a bit soft and get smashed to bits by rocks as they’re washed downstream or covered in sediment. So at some sites, like Thousand Creek in Nevada, skulls are extremely rare but ankles and other foot bones are super common.

If we want to know what camels lived in Thousand Creek 8 million years ago, skulls are not enough. 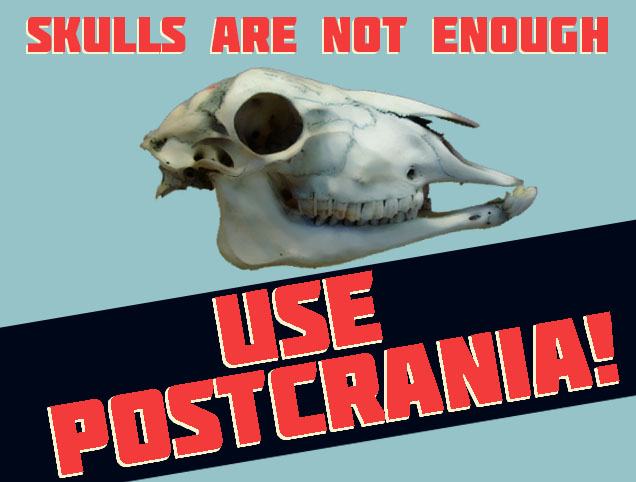 Instead, we need to be able to identify all of these ankle bones. At a basic level, this lets us know what kind of camels lived there, but that’s important for more than just paleontological trivia. Those little bits of data go into larger-scale studies of evolutionary and ecological dynamics. Each time we increase our knowledge of a single fossil site, we add another brick to the foundation of our largest-scale analyses, improving our ability as a species to predict how our earth’s fragile ecosystems will behave as we turn up the thermostat.

Now for a bit of human interest. See, scientists are people too, so this research paper has a human story behind it. The story begins like this: Edward had to collect data for his dissertation, so starting around 2003, he began collecting data on just about anything else he could, so that he could avoid working on said dissertation research. (It feels so good to come clean this way!) Like every other PhD candidate who has ever lived, he developed a pathological need to procrastinate on the ol’ dissertation, and it seemed justifiable if the procrastination was by way of measuring fossils. Then, around 2004, he needed to write said dissertation, so what did he do? He began drafting papers on all of the fossil-measuring work. Of course this wasn’t a sustainable approach, so he finally buckled down and wrote the dissertation, leaving all of these half-finished papers in the procrastination file.

And there they sat until his arrival at Oregon in 2007. The first of these papers, an investigation of antelope diversity at Thousand Creek, was resurrected with Jonathan Calède and published in PE in 2012. Brianna, who joined the Oregon 4D Biology Lab as an undergrad in 2009, helped get the camel paper out this year. And by helped, we mean completely re-wrote the MS and re-ran most of the stats. Edward may or may not have more of these procrastination manuscripts in reserve, waiting for other students to take them up and produce them.

If you’ve read this far, you may be asking yourself “What did they do, exactly?” We’re glad you asked. We measured many, many ankle bones (or “astragali,” in fancy science-speak) from the Thousand Creek, which we’ll call the “unknowns.” Then we measured many, many astragali from other fossil sites. We chose these sites in particular because they were from the same age as Thousand Creek and the camels in these sites were identified from skulls, so we could be reasonably confident that the identifications on the astragali were correct. We’ll call these the “knowns.” We were able to use the known camels to build a Discriminant Function Analysis to identify the unknowns.

What’s a Discriminant Function Analysis? Another good question. You, my friend, are the epitome of a good reader. A Discriminant Function Analysis (DFA for short) is fancy bunch of math that lets you predict the category an object belongs to if you know some of its characteristics. The catch is that first you need a collection of objects for which you already know the categories. Say, for example, that you have the heights, arm lengths, and vertical leap measurements of a group of students, and you know which of them are on the basketball team and which are not. These are your “knowns.” You can then build a simple discriminant function to tell you the chance that a new, “unknown” student would be on the basketball team using his/her height, arm length, and vertical leap.

So for camels, it goes like this: we took measurements on our “knowns,” which are camel astragali with a genus or species identity. Then we built a discriminant function using these “knowns” and their measurements. Next, we took the same measurements on our “unknowns” from Thousand Creek and used the function to predict their taxonomic identities. In the end, we were able to make a reasonable discriminant function that was able to identify some, but not all, of the camel ankle bones. We concluded that we could confidently identify four groups of camels at Thousand Creek, which for this blog post we will call small, extra-medium, large and XL.

The small camels belong to the genus formerly known as Hemiauchenia. This genus has been split into three genera, like the pieces of a MacGuffin for a fantasy movie. The first two genera are Heimauchenia (the name has to stick around) and Pleiolama, and the other one is yet to be named, so we currently call it “Hemiauchenia”. The quotes are science-speak for “not really Hemiauchenia.”

The extra-medium camels belong to a genus called Alforjas. This name is awesome because it is one of the few extinct camel names that doesn’t have the camel-related roots “camelus” or “tylopus” or “auchenia” or “lama” in it. Hooray for non-standard scientific names!

The large camels belong to a genus called Procamelus, which is the subject of additional ongoing research in the UO 4D Biology Lab. It’s all hush-hush, but rest assured we have our Top Men working on it. Top. Men. And Women. Top Women, too.

The XL camels belong to a group we’re calling ?Megatylopus. The leading ? is science-speak for “probably not Megatylopus, but we can’t be sure”. It’s roughly the same size as the Fricking-huge camel known as Megatylopus, but some of the data suggest it’s actually something different. Again. Top Men. And Women. (Please note that these XL camels are much larger than our modern ones: Megatylopus is bigger than a rampaging bison riding on a John Deer lawn tractor. Or something else big and intimidating.)

Note that this is an example of why it’s important to just do cool science with no immediate application. Someday each little bit of science ties back into the big-picture models that we use as a species to make decisions about policies. Whether or not each study has an immediate and tangible use to humans, science is a tool for society to look into the future and understand the processes critical to humankind. It’s the best way for us to predict the consequences of our decisions, and the more science done overall, the better all of our models are for all kinds of forecasting.

We have made a pyramid figure to explicitly relate the ‘stamp collecting’ aspect of paleo that is often decried by non-specialists to all of the many kinds of important process-based inferences that rest atop this small point. View it and weep in awe. 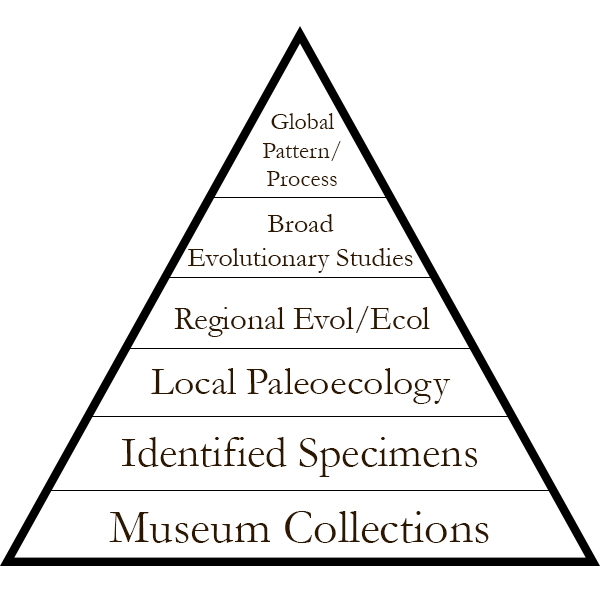 At the base we have museum collections, the foundation of paleontological work. Here is where we do our stamp collecting, and it requires huge amounts of effort: figuring out where fossils might be, field crews to go find them, excavation, field notes, stabilizing fragile bones, building jackets, chiseling rock from things once they come back from the field. Implicit in this level is the critical data stored with the specimens, which can essentially be summed up as where each one is from: which rock layer, fossil locality, rock formation, county, state, country? Who collected it? Was it found with anything else?

That brings us to the next level: identifications, also known as, “What is it?” That’s what this paper of ours addressed! To be useful, fossils must be identified. Sometimes that’s hard. But any time you make it easier, that means more fossils can be used in the next levels of the pyramid.

Identifying all the animals (OK, or plants or microbes. Those can be fossils, too.) in a site starts to give you an idea of the local paleoecology – that is, the ecology of the area in deep time. Knowing the kinds of critters that lived there at a certain time tells you something about their relationships, like who was eating whom, and maybe something about the kind of environment they lived in.

Tying together local paleoecology at the regional scale is where we get to start making sweeping gestures with our arms and speaking in dramatic tones, like Mufasa showing Simba his future kingdom. This level becomes more inclusive both spatially and temporally: we might follow a region through time, seeing how its inhabitants change over millions of years in response to major climatic or other environmental changes, or we might begin to examine different areas of the same age, investigating how the faunas are different from one site to the next and looking at variation within species across different habitats.

Understanding regional paleoecology supports broad-scale evolutionary studies, which can be focused on specific groups evolving through time or can be concerned with changes in diversity across all preserved groups.

Eventually, all those individual fossils (combined with other data) can help us reconstruct massive patterns and processes through millions of years on a continental or global scale. These are the questions that have more immediacy for those not directly involved in our field. What happens to plants and animals when global climate changes dramatically? Do animals evolve where they are, or make great treks to follow their ideal habitats? Is global biodiversity tied to global temperature? Do mass extinctions shape diversity more than background extinctions?

So it turns out that figuring out how to better identify ankle bones is pretty important after all.