At long last, Villains Month comes to an end. I know that Stu thinks DC can’t possibly be selling extra comic books this way, but I’m pretty sure they’re making out well from this deal. For example: this month, I have purchased 11 Villains Month books, and I usually get 11 different books from DC’s New-ish 52. The regular books usually cost $2.99, but these special issues with the fancy 3D covers cost $3.99, so that’s about $11 extra dollars from me. Of course, those fancy covers cost extra to make, so it might all be a wash. Happily, two of the four issues I got this week were excellent from a story-telling perspective and a third was OK.

Ratings out of five stars: 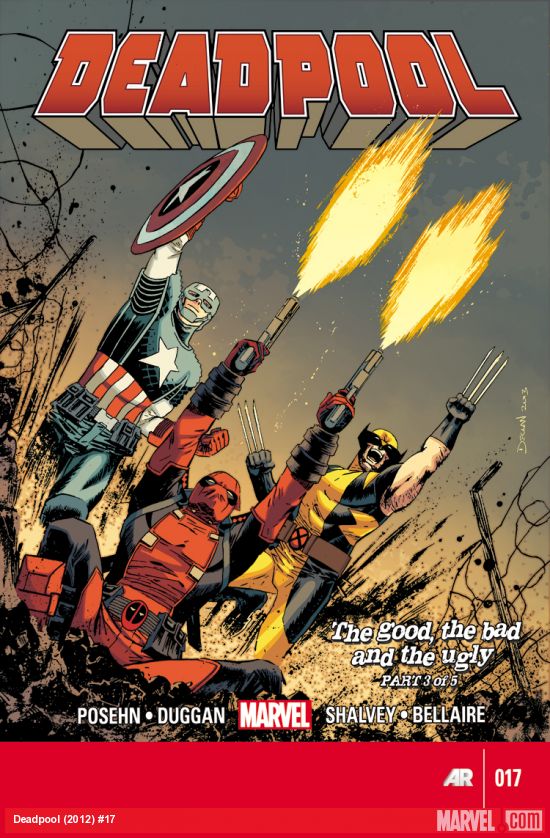 Which one is the ugly?

Deadpool #17, Posehn, Duggan, Shalvey, Bellaire, Cover by Shalvey and Bellaire. ****
A good effort, this issue is clearly setting us up for the final battle in issues 4 and 5. Consequently, not much happens, but as DP teams up with Cap and Wolverine, he still manages to keep it real. My favorite touches: Quoting Silence of the Lambs when he wakes Cap up from hibernation and the Deadpool-themed brass knuckles.

Bane #1 (Batman #23.4), Tomasi, Nolan, Kalisz, Mangual, Cover by March. **
This book commits the primal sin of having no real plot. Bane is moving his army to Gotham to take over in the wake of the events of Forever Evil. In the process, he seems to get his exercise by beating his own soldiers to death. So, in essence, making Batman’s job easier. We get some flashbacks giving Bane’s origin, but not in a very compelling way. Usually Tomasi does a better job; this issue feels mailed-in.

Killer Croc #1 (Batman and Robin #23.4), Seeley, Portella, Morey, Hill, Cover by Gleason, Gray, and Kalisz. *****
This was my favorite of the Villains Month books. I love Seely’s vision of Croc, the story is told with great pacing, and while the four characters introduced in this story are all killed by the end, they have their personalities developed before their deaths (or through flashbacks), and each killing contributes to the story. Overall, it was a good, emotionally effective story. Also, the 3D cover was well composed and made good use of the effect.

My only problem: this story does not fit the Killer Croc story told in the pages of Batwoman, where he took control of the Religion of Crime… He has a similar cult here, but of normal, not were-people.

Doomsday #1 (Batman/Superman #3.1), Pak, Booth, Rapmund, Dalhouse, Mangual, Cover by Daniel, Florea, Morey. *
This book is a terrible mish-mash of symbolism, foreshadowing, flashbacking, and frame-story-ing. I couldn’t tell where I was or what I was supposed to glean from most of the pages, and I’m not sure how this story ties into the Villains Month, because most (all?) of the action seemed to be before the destruction of Krypton… WTF?

**Spoiler alert** First-Born is not a very nice person. This may or may not be because he was raised by hyenas.

First Born #1 (Wonder Woman #23.2), Azzarello, Aco, Wilson, Fletcher, Cover by Ibáñez. *****
This issue is also wonderful, and I think that’s because it’s clearly a linear part of the broader Wonder Woman storyline Azzarello’s been weaving for two years. The pacing is excellent. The frame story makes sense and progresses the overall arc in addition to sensibly framing the flashback. The art is beautiful in the strong-lined style that has become a trademark of Wonder Woman. If the other Villains Month issues had been made with the same care as this one, I would feel a lot better about all of the $3.99’s I’ve plunked down this month.

« Comics Pull List for 9/18/13 – Will Villains Month Ever End?
Fossil voles point the way to the future! »
Skip to toolbar